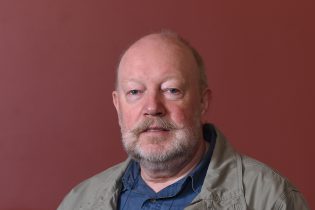 Born in Wimbledon, London in 1951 of Irish parents: his mother from Limerick, his father from Ennis; Walsh spent only sixteen years in England’s capital city. Educated in London until 1968 and subsequently in Limerick at Villiers Secondary School he initially lived in Limerick but since 1990 has lived and worked in Co Clare where he has a studio. He studied at the Limerick School of Art and took an MA in Fine Art (Painting) at the National College of Art & Design, Dublin. He also holds a NUI Diploma in Philosophy from Mary Immaculate College of Education. He was elected a member of Aosdána in 1997 and served as a Toscaire from 2007-2009, 2015/2016 and 2018 to present. He is the founder of the National Collection of Contemporary Drawing that hangs in the Limerick City Gallery of Art.

He has had solo shows with the Oliver Dowling Gallery, (1983/1985/1988/1991/1992), the Rubicon Gallery (1996/1999/2002), the RHA’s Ashford Gallery (2007), Hillsboro Fine Art (2007/2012), and the Oliver Sears Gallery (2014) all in Dublin. He has also had solo exhibitions in Cork, Limerick, Ennis, Dublin, Carlow, and Ennistymon. He held one-person shows at Foundation Binz39, Scoul-Nairs, Switzerland in 1990 and Galerie B, Pont-Aven, France in 2002. Major one-person shows of his work were exhibited at the Limerick City Gallery of Art in 1989 (touring) and 2003. A self-selected exhibition of his drawings from 1982-2000 was shown at University College Cork in 2000. A selection of small works on paper from 1982-2002 was shown at the Hunt Museum, Limerick in 2003 and he showed paintings completed from 2003-2009 at the same venue in 2010. He exhibited ‘Segment & Apple Drawings’ at the Hunt Museum, Limerick in 2018. In November 2007, Walsh exhibited a major body of work based on Dante Alighieri’s The Divine Comedy at the Limerick City Gallery of Art part of which travelled to France in 2008. It was shown in its entirety again at the Triskel @ ESB: Caroline St., Cork in 2010. A show of paintings entitled ‘The Coercion of Substance’ was exhibited at VISUAL, Carlow in September 2011 and then travelled to the Highlanes Gallery, Drogheda, Co Louth and the Regional Cultural Centre, Letterkenny, Co Donegal in 2012. He has held two-person shows with Michael Warren, Michael Fitzharris, Liam Flynn, and Richard Gorman. The latter show was called ‘Buzz & Hum’ and toured from Limerick City Gallery of Art in 2017 to Uillinn: West Cork Art Centre, Skibbereen, in early 2018.

He has exhibited in open and invited group exhibitions held throughout the island of Ireland. He has been a constant exhibitor with the Royal Hibernian Academy since 1982 (invited: 2005/2008/2013). His international career is extensive, and he has earned a considerable reputation for his work in Europe. He first showed in the 246th Royal Academy Summer Exhibition, London in 2014. He has represented Ireland many times in exhibitions abroad including the USA, Estonia, France, Sweden, Canada, Slovenia, China, Singapore, Scotland, Hong Kong, Germany, and Belgium. His work has represented Ireland in international drawing exhibitions in Poland, Hungary, Norway, France, Germany, Italy, Slovakia, Australia, Greece, Thailand, and England. He represented Ireland at NordArt, Büdelsdorf, Germany and the Laureates International Drawing Biennial, Pilsen, Czech Republic in 2015 as part of the latter’s European City of Culture status. He won the Grand Prix (First Prize) at the 15th International Triennial of Drawing, Rijeka, Croatia in 2001 and the prize of the International Association of Art – Europe at the IV International Biennial of Drawing, Pilsen, Czech Republic in 2004.

He has received many national awards, grants, and bursaries. He won First Prize in the Irish Exhibition of Living Art in 1988 and the same for drawing at the 10th Íontas Small Works Exhibition in 1999. He won The Savills Art Prize at the VUE Contemporary Art Fair, Dublin in 2017.