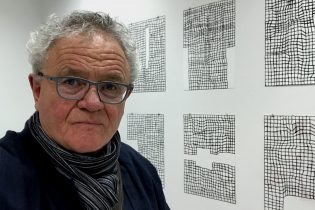 Born in Trim, Co. Meath, in 1950, Charles Tyrrell studied at the National College of Art & Design in Dublin.

His early large scale canvases were influenced by American abstract expressionism and have since evolved in a more minimalist direction, working from detached geometric beginnings towards images that incorporate a sense of reality, a distillation of the experienced world. Currently his work practice incorporates painting on canvas and aluminium as well as drawing and print.

He represented Ireland at the Paris Biennale in 1982, and has exhibited in major group exhibitions in Ireland and abroad, including L’Imaginaire Irlandais, Paris (1996); the Baghdad International Festival of Art (1988); the Oireachtas Exhibition (1973-78); the Irish Exhibition of Living Art (1972-82), winning its Carroll’s Award in 1974; and the Cagnes-sûr-Mer painting festival (1981), recieving a jury’s special mention. He taught at the Dun Laoghaire School of Art from 1977 to 1981.

He has lived and worked in Allihies on the Beara peninsula, Co. Cork since 1984.