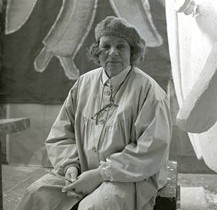 Born in Berlin in 1927, Imogen Stuart was apprenticed to Otto Hitzberger, former professor of the National College of Fine Art in Berlin, before moving to Ireland in 1951. Her influences range from German expressionism to early Irish Christian art, and she works in wood, stone, bronze, steel, clay, plaster and terracotta.

In 2000, she was elected Professor of Sculpture by the Royal Hibernian Academy, which held one of her first exhibitions in 1949. Her work is in the National Self-Portrait Collection in Limerick, and she has exhibited at the Salzburg Biennale (1962); the Hugh Lane Municipal Gallery, Dublin (1987); and the Solomon Gallery, Dublin (1996, 97, 2002). Her sculptures have been displayed in public places across Ireland and especially churches, from Christ Church and Armagh Cathedrals to St. Patrick’s Purgatory and the Dublin Airport church. A retrospective exhibition of her work was held at the RHA in 2002.

She has received the Oireachtas art exhibition award (1972) and the ESB Keating McLoughlin award at the RHA annual exhibition (1999), among others. She has also received honoris causa from Trinity College (2002), UCD (2004) and NUI Maynooth (2005). She was elected Saoi of Aosdána in a ceremony presided over by President of Ireland Michael D. Higgins on 15 September 2015, where she was presented with the symbol of the office of Saoi, the gold Torc. She lives in Co. Dublin.