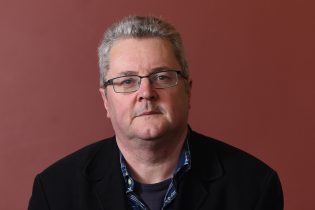 Peter Sirr was born in 1960. After a number of years in Holland and Italy he returned to Dublin where he was the first Director of the Irish Writers Centre, a post he held until 2003. A former editor of Poetry Ireland Review,  he currently works as a freelance writer, editor and translator, and is Guest Translator in the M.Phil in Literary Translation in Trinity College.

The Gallery Press has published his poetry collections Marginal Zones (1984), Talk, Talk (1987), Ways of Falling (1991), The Ledger of Fruitful Exchange (1995),  Bring Everything (2000),  Selected Poems (2004) and Nonetheless (2004). Wake Forest University Press published his Selected Poems in 2006. His most recent collection is The Thing Is (2009), for which he received the Michael Hartnett Award. A regular critic and essayist, he has also written drama for radio and novels for children.

He lives in Dublin. His websites are petersirr.com and petersirr.blogspot.com