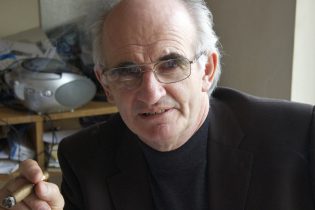 Born in Brosna, Co. Kerry in 1952, James Scanlon began a career in the performing arts, studying mime in 1972-73, before attending the Cork School of Art and focusing on sculpture and film. He studied traditional glass techniques in the late 1970s and set up his own studio for glasswork in 1982, from which he has produced stained glass installations for arts centres, theatres, churches, cathedrals, offices, community centres and hospitals across Ireland.

Major commissions include the interior of an icon chapel for the monks of Glenstal Abbey, Co. Limerick (1987); a large installation for the Arts Council of Ireland in Sneem, Co. Kerry, as a series of stone pyramid structures called Slí na Síoga (1989); a stained glass window for the European Union’s Consilium Building in Brussels (1994); and an environmental sculpture incorporating a sixth-century blessed well, Tobar Moling Lucra, at Brosna, Co. Kerry (1997-98).

Among other solo shows, The Drawings of my Father, a series of inks and watercolours, exhibited in Cork, Tralee and Newcastle, England, from 1995 to 1998; and In the Shadow of a Big Heart exhibited at the Temple Bar Gallery in Dublin in 2000. He lives in Cork.