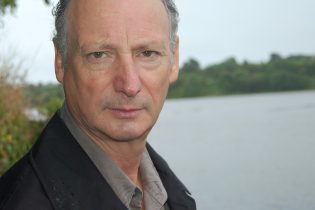 Billy Roche began his career as a singer/musician, forming the Roach Band in the late seventies.

His first novel, Tumbling Down, was published by Wolfhound Press in 1986. His first stage play, A Handful Of Stars, was staged at The Bush Theatre in 1988. This was followed by Poor Beast In the Rain in 1990. Belfry completed this powerful trilogy at the Bush Theatre. All three plays, directed by Robin LeFevre, became known as the Wexford Trilogy and were performed in their entirety at The Bush, the Peacock and the Theatre Royal, Wexford. Later the Wexford Trilogy was filmed for the BBC directed by the late and great Stuart Burge.

Billy’s fourth play Amphibians was commissioned by the R.S.C. and performed at the Barbican. This was followed by The Cavalcaders at The Peacock and Royal Court, London. He wrote the screenplay for Trojan Eddie, which was directed by Gillies MacKinnon and starred Stephen Rea and Richard Harris. Trojan Eddie won the Best Film Award at The San Sebastian Film Festival in 1996. His sixth play On Such As We was performed at the Peacock in 2001, directed by Wilson Milam and starring Brendan Gleeson.

Tales From Rainwater Pond, his collection of short stories was published by Pillar Press in 2006.   Lay Me Down Softly, his 7th play, was performed at the Peacock Theatre in 2008. Billy has been Writer-In-Residence at the Bush and Writer –In-Association at Druid and the Abbey Theatre.

As an actor Billy has appeared in A Handful Of Stars at the Bush, Aristocrats at Hampstead Theatre, Poor Beast In the Rain at Andrews Lane, The Cavalcaders at The Peacock/Royal Court, The Grapes Of Wrath for Storytellers. His film and television work include The Bill, Strapless, Trojan Eddie, Saltwater, Most Important, Head Wrecker, Man About Dog and Crowning Glory.