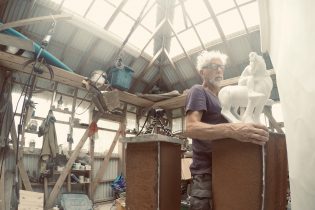 Born in Cork in 1962, Michael Quane studied at the Crawford School of Art. He exhibited internationally every year from 1988 to 1995 – in New York, Amsterdam, Belgium, Switzerland, and England – in addition to shows across Ireland.

Solo shows include the Hallward Gallery, Dublin (1997); Temple Bar Gallery, Dublin (1998); Fenton Gallery, Cork (2001); and a forthcoming exhibition in Lewes, England in 2004. His many public works are often in limestone or marble, and portray men and animals, frequently using the motif of a horse and rider.

Major commissions include Tomás Ó Criomhthain at the Blasket Islands Centre in Dunquin, Co. Kerry (1993); Horses and Riders at the motorway roundabout in Mallow, Co. Cork (1995); The Predator on the canal walk in Kilkenny (1995); Lapidophytum stagnalis at the National Botanic Gardens, Dublin (1997); Persona at the Mayorstone Garda station in Co. Limerick (2000); and works for University College, Cork (1994), Dúchas National Monuments Depot, Killarney (2000); and Castlebar General Hospital (2002).