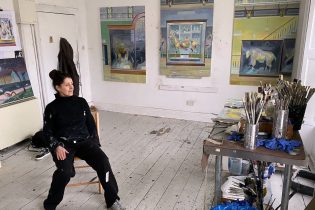 Mairead O’hEocha began studying architecture in Dublin before moving to London, where she went on to graduate and work in photo-journalism. In 2000 she obtained a BA Hons Degree in sculpture from the National College of Art and Design, Dublin, and in 2004, an MA in Fine Art from Goldsmiths, University of London. Since 2006 she has worked primarily in the medium of paint and has exhibited widely, both nationally and internationally.

Her paintings are recognised for their contemporary re-interpretations of ‘landscape’, ‘still life’ and the ‘natural’ world. Utilising a mix of languages and subjects, they offer a form of ambiguous ‘time travel’, asking what might be an appropriate way today to address our love for both nature and painting itself, while recognising our estrangement from the ‘natural’.

She is represented in a number of important group exhibitions and publications that have explored contemporary painting practices, including: Slow Painting (curated by Martin Herbert), Hayward Gallery Touring Programme, UK (2019-2020); A Painter’s Doubt, Salzberger Kunstverein (2017) and Vitamin P3: New Perspectives in Painting), published by Phaidon, 2016.

Her work is held in the collections of the Irish Museum of Modern Art, the National Gallery of Ireland, the Arts Council and the Office of Public Works. She has received several Arts Council awards and is represented by mother’s tankstation Limited, Dublin & London.