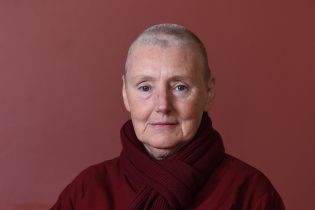 Pat Murphy is a film maker who works across a range of practices. Her art studies began at the Ulster College of Art and Design and continued at Hornsey College of Art where she graduated in Fine Art. She received an MA in Film and Television from the Royal College and won a scholarship to attend the Whitney Museum Independent Study Programme in New York.

She has participated in a number of exhibitions including P(ages) at City Gallery Limerick, “The Muybridge Solo” at Vehicule Art, in Montreal and Film As Film at the Hayward Gallery in London. In 1992, she made a film installation for the Strokestown Famine Museum in County Roscommon. In association with the IFI, Pat curated a number of film programmes to accompany From Beyond the Pale (1994) and The  Event Horizon (1997) at IMMA.

Maeve, her first feature for cinema was screened in competition at a number of international festivals including Venice and won the  Best Irish Film Award in Cork 1981. Anne Devlin, her second feature was completed in 1983. Both films were distributed internationally and broadcast on television. Nora, starring Ewan McGregor and Susan Lynch, was an international co-production Awards include the First Prize at the Trieste Film Festival, Best Script at the Abruzzo Festival and the UIP Director’s award in 2000. Documentaries include Sean MacBride Remembers and This is us we’re talking about….

A founder Board Member of FILM BASE and the Screen Directors Guild of Ireland. Pat is also a member of Aosdána. Over the past three years she has been Associate Arts Professor on the Graduate Film Program at NYU Tisch Asia in Singapore.  In July 2011, the IFI presented a retrospective of her work.