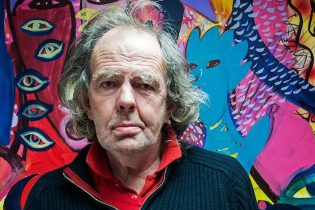 Michael Mulcahy was born in Cork, Ireland in 1952. He was educated at the Crawford Municipal School of Art, and the National College of Art and Design. He is one of Ireland’s leading expressionist artists. Throughout his 45 year career he has amassed many awards. Most notably receiving membership to Aosdána, the highest honour given to Irish Artists.

Not only has Michael Mulcahy had numerous exhibitions at home, but being an extensive traveller, he has had many abroad. Time spent in Papua New Guinea, India, Korea and Australia have strongly influenced his work, which often portrays indigenous people, and natural environments. The Australian Aborigines, the Malis of Africa, Hindu ceremonies on the Ganges and other experiences, have all at various times fed his psyche, and filled his canvases.

During a long stay at a monastery in South Korea, the chief Buddhist monk-artist there, gave him the name ‘Do-gong’, which means ‘empty island, clear sky’. Artists who discover the Mystic East can often just imitate oriental art. However the art critic of The Irish Times, Brian Fallon wrote; ‘’Mulcahy’s images float amid such a dense web of colour, which hit you so full on, with it’s light and energy, that there is no effort to copy oriental style. His vibrating pictorial rhythms and dynamic power, make his painting of international standard. He is one of the select few Irish artists who could walk into any major exhibition in the world, and be at home there.’’ Gemma Tipton, of Circa Art Magazine said; ‘’Mulcahy’s distinctive, expressive, vigorous art, combined with rich colour, energy and mystique, mark him as one of the most intersting Irish artists of his generation.

Michael Mulcahy’s first public exhibition was in 1981. Within twelve years, in 1994 he had two major national exhibitions at the Hugh Lane gallery of modern art, and Taylor galleries in Dublin, titled « Do-Gong » series. As well as many more national exhibitions since, he has exhibited in New-York, London, Paris, Brussels and the Museum of Modern Art in Seoul. Michael Mulcahy represented Ireland in the Sydney Biennale. He has illustrated two books of poetry for the Irish President, Michael D. Higgins, who has said on national television that, “Michael Mulcahy is one of our very best artist. Some of his paintings are among my favourites.”

Michael Mulcahy’s recent exhibitions were, in the group show, ‘Art on Paper’, New York, 2017.  ‘Art knows no Frontiers’, Berlin.  He had a solo show, ‘Shapeshifting’, in Atelier Clot, Paris, 2019 along with solo shows in, Wexford, Kilkenny, and his home town Dungarvan.