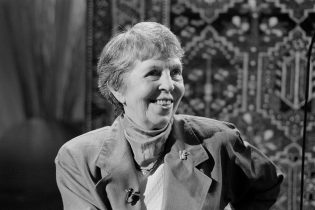 Born in Dublin in 1922, Máire Mhac an tSaoi was raised bilingually in Irish and English. She studied Irish, French and English at UCD. She then studied law at Kings’ Inns, Dublin, and was called to the Bar in 1944. She won a scholarship to study in France in 1945. Between 1947 and 1962, she served with the Department of Foreign Affairs in Dublin, France, Spain, and with the United Nations. She also lived for a time in Africa and the US. Her published work while a member of Aosdána included Dhá Sceál Artúraíochta (1946); Margadh na Saoire (1956); A Heart Full of Thought (1959); Codladh an Ghaiscígh (1973); and An Galar Dubhach (1980). Awards include an honorary degree from the National University of Ireland and the 1988 O’Shaughnessy Award for Poetry. She lived in Howth, Co Dublin.