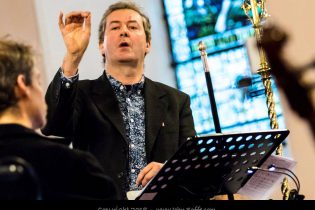 John McLachlan was born in Dublin and studied music at the Royal Irish Academy of Music and Trinity College, Dublin. He has studied composition with William York, Robert Hanson and Kevin Volans. He holds a PhD in musicology from Trinity College Dublin, where he specialised in researching the compositional techniques of Boulez, Xenakis, Lutoslawski and Carter.

He is also known as a broadcaster and writer on contemporary music, with many published articles. In addition, in his roles as Executive Director of the Association of Irish Composers and administrator of the Irish Composition Summer School, he has promoted Irish composers in an international context, presented international composers in Ireland, and run concerts, workshops, mentoring programmes and other events.

His music is available from the Contemporary Music Centre www.cmc.ie. His website is www.johnmclachlan.org