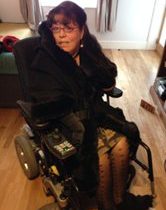 Rosaleen McDonagh is a Traveller woman with a disability. Originally from Sligo, she is the fourth eldest in a family of twenty children. She worked in Pavee Point Traveller & Roma Centre for ten years managing the Violence Against Women programme, and remains a board member.

She is a regular contributor to The Irish Times and has written ostensibly within the framework of a Traveller feminist perspective. McDonagh’s work includes The Baby Doll Project, Stuck, She’s Not Mine, and Rings. Rings was performed at VAS in Washington in June 2010. McDonagh was shortlisted for the PJ O’ Connor radio play Awards 2010. While in the United States with Fishamble, Colum McCann, Booker Prize winner, gave her the rights to adapt his 2007 novel Zoli for stage. She has also been commissioned for RTE Radio 1, by Sunday Miscellany. In March 2012, Beat Him Like a Badger was selected by Fishamble to be part of the Tiny Plays for Ireland series. Also in 2012, McDonagh wrote a feature article in the Irish Times responding to Channel 4’s series My Big Fat Gypsy Wedding. During 2013 and 2014 she worked with Graeae Theatre on its WTP programme. As part of this project, she spent two weeks on attachment in The Royal Court Theatre. She has a BA in Biblical & Theological Studies, an MPhil in Ethnic & Racial Studies & an MPhil in Creative Writing, all from TCD.

She is currently a PhD candidate in Northumbria University. Her play ‘Mainstream’ was directed by Olivier award winner, Jim Culleton.