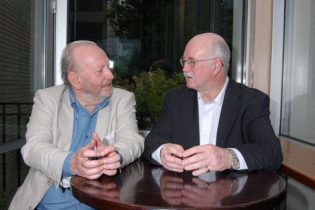 Born in Belfast in 1941, Derek Mahon was educated at Trinity College Dublin and the Sorbonne.

He worked as a journalist and screenwriter in Dublin and London, adapting Irish novels for television, and taught at Barnard College, New York and New York University.

He received numerous awards including the Irish Academy of Letters Award, the Scott Moncrieff Translation Prize, and Lannan and Guggenheim Fellowships. In recognition of his ‘lifetime’s achievement’ Derek Mahon received the David Cohen Prize for Literature in 2007. His work for the theatre included versions of Moliere’s The School for Wives and High Time, Racine’s Phaedra, The Bacchae (after Euripides), Cyrano de Bergerac (a new version of Rostand’s ‘heroic comedy’) which was produced at London’s National Theatre in 2004 and Oedipus (after Sophocles) which was published in 2005. In 2013 his collected plays, theatre, was published. Limited Signed Editions also appeared from The Gallery Press: Somewhere the Wave with drawings and watercolours by Bernadette Kiely (2008) and Rising Late with paintings and drawings by Donald Teskey (2017).

He lived in Kinsale, Co. Cork.