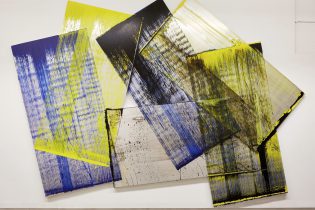 Lennon (christened Kieran Lennon) was born in Dublin in 1947. He lives and works in Dublin.

Known for his Art form: Porous Plane, which has its beginnings in the Folded / Unfolded paintings of 1969-1972.

His position and point-of-view derives from his discovery aged 12 (1959) of the Holocaust, and later, the need for a secular, formal art to underpin the democratic aspirations of the new Irish state, and from his experience of living in the post-colonial Church / State hegemony. ‘One is not born for Societies needs’ evolved his Art and his life as a self-maker.

Wary of moral meanings attaching to art, he set out to strip painting of image (Gorgon) and language (Illustration)

I assume no knowledge of people’s inner lives…that’s my position and my point-of-view : I manifest that vision directly as possible : by means of painting : to clear a way to that subject : through the synthesis of the materiality of the painting…to get as close as possible to that unknowable self… deeper than images and identities…unnameable.