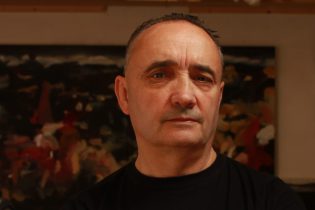 Born in Dublin in 1958, Stephen Lawlor is a painter and printmaker. He graduated with an honours degree from NCAD and lectured at the Dept. of Fine Art, IADT in printmaking and drawing from 1991-1997. He was chairman of Graphic Studio Dublin, 2000-2005 and became a founder member of the International Academic Printmaking Alliance at the Central Academy of Fine Arts in Beijing 2016. He was on the jury for Masters in Printmaking 2017 and Masters in Painting and Printmaking in 2018 at the Royal Academy of Fine Arts Antwerp. He became an associate member of the Royal Society of Painter Printmakers (RE) London 2016 and a member of Aosdána in 2018.

His work evocatively explores western painting and it’s connection with time and the iconography of the human form. Although there is some overlap between his painting and printmaking, they both address pictorial space from figuration to abstraction.