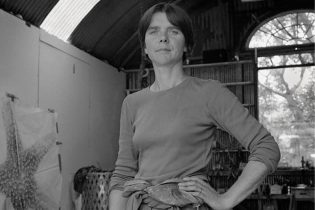 Born in 1966, Rachel grew up in Dublin and currently lives and works in the Blackstairs Mountains, Co Carlow. Rachel was elected full member of the RHA in 2005.She exhibits regularly at the Solomon gallery, RHA Annual, including a solo show in the Ashford RHA Gallery in 2013. Many of her large public artworks are highly visible such asMothership Dun Laoghaire seafront and Noah’s Egg on UCD campus. In 2016 Rachel was awarded a major public artwork for Áras an Uachtaráin to commemorate the 1916 Rising – Dearcán na nDaoine/The People’s Acorn. A recent commission Keepsake, inspired by the native Irish Strawberry tree was launched in Sept 2019 in Lansdowne Pl, Dublin, on a location that once was the Trinity College Botanical gardens. She is currently working on a large sculpture Síol/seed for Glencar House on Merrion Rd, Ballsbridge, Dublin and has just completed working on a coastal Commission for a school in East Cork ÉIST/ listen, Scartleigh NS, Saleen , Co Cork.

In November 2021 Rachel featured as a guest Artist for RTE programme The Works Presents , with John Kelly.