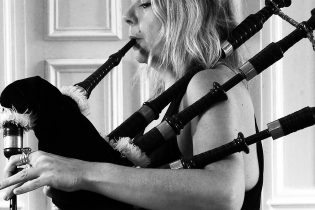 Jaki Irvine currently lives and works in Dublin having spent many years in London and some time in Italy. Her works in film and video, whether in single-screen format or in more complex multi-screen installations, weave together enticing, though ultimately elusive narratives in which image, voice-over and musical score variously overlap, coalesce and diverge. These languid explorations of human interaction with the natural world, the built environment, and with other humans are suffused with a melancholic lyricism and leavened by a dark, dreamlike humour. Subjectivities split and fragment as the boundaries that separate self from other, or human from animal, become fluid or permeable. In 1995 Irvine was included in the seminal exhibition of Young British Artists, General Release, at the Venice Biennale, and she represented Ireland at the 1997 Biennale.

Her solo exhibitions include shows at Project Arts Centre (1996) and the Douglas Hyde Gallery (1999) in Dublin, Frith Street Gallery (1997, 1999) and Delfina Project Space (2001) in London, and the Staatliche Kunsthalle in Baden-Baden, Germany (1998). She has also participated in numerous group shows throughout Europe, Australia and Japan including Sonsbeek International, Arnhem (1993), NoWhere Louisiana Museum of Modern Art, Denmark (1996), White Noise, Bern Kunsthalle, (1998), Intelligence, Tate Britain (2000) and Shifting Ground: 50 Years of Irish Art at the Irish Museum of Modern Art (IMMA) (2000). A major new work, The Silver Bridge, is due to be exhibited at IMMA in Spring, 2004. Irvine is represented in the collections of IMMA, the British Council and in numerous other collections, both public and private.