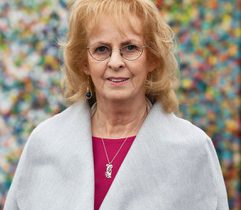 Rita Ann Higgins was born in 1955 in Galway, Ireland. She has published 10 collections of poetry, a memoir in 2010 and a book of essays with poems in 2019. She left formal education at 14. As an adult, in NUIG she received a Dilploma sa Gaeilge and a Diploma in Women’s Studies 1994-1996.

As editor, Out the Clara Road: The Offaly Anthology (1999), Word and Image: a collection of poems from Sunderland Women’s Centre and Washington Bridge Centre in 2000. Co-edited ‘FIZZ’ Poetry of resistance and challenge, an anthology written by young people, in 2004.

Rita Ann Higgins is a recipient of Galway County’s Writer-in-Residence in 1987, Writer in Residence at the National University of Ireland, Galway, in 1994-95, Writer in Residence for Offaly County Council in 1998-99. Green Honors Professor at Texas Christian University, in October 2000. Other awards include a Peadar O’Donnell Award in 1989, several Arts Council bursaries. Sunny Side Plucked’ received a Poetry Book Society Recommendation. Honorary Fellow at Hong Kong Baptist University Nov 2006. She is a member of AOSDANA

Voluntary Community workshop 2013-2015 with Galway Grow Group- promoting positive mental health where they produced a play based loosely on Chekov’s Ward No Six. Written and performed by the group.