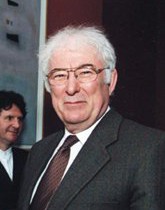 He has published several works of prose and criticism, including Preoccupations (1980), The Government of the Tongue (1988) and The Redress of Poetry (1995). He has done translations of  two plays, The Cure at Troy: A Version of Sophocles’ Philoctetes (1990) and The Burial at Thebes: A Version of Sophocles’ Antigone (2005), and co-edited two selections of poetry with Ted Hughes, The Rattle Bag (1982) and The School Bag (1997).

He taught English and poetry at Queen’s University and at Harvard University, and was professor of poetry at Oxford University from 1989 to 1994. He won the Nobel Prize for Literature in 1995. He was elected Saoi of Aosdána in 1997. He died on 30 August 2013.

Statement issued on behalf of the Toscaireacht of Aosdána 30 August 2013:

The death of Seamus Heaney will be a heart-blow to all who knew and loved him, a wound that will be a long time healing.

He was a founder member of Aosdána, a generous contributor to its business, a wise, steadying, and inspiring friend and colleague.

Aosdána elects a small number of members as Saoithe, in recognition of their extraordinary contribution to their art. As a Saoi, Seamus was exemplary in his firm and unswerving commitment to poetry; as a colleague and friend to all artists he was  immensely generous  with his time, his experience and indeed his wisdom.

We will treasure his memory and we will keep his work in our hearts.