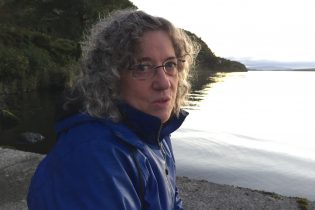 Margo Harkin was born in Derry in 1951 and continues to live and work there. She graduated in Fine Art from the Ulster College of Art and Design in 1974 and worked as a teacher, tutor and community artist before joining Field Day Theatre Company in 1980 as an Assistant Stage Manager and later as a Theatre Designer during a highly volatile period in N. Ireland’s politics. The company’s intention to create a ‘fifth province’ that transcended the crippling oppositions of Irish politics had a profound influence on Margo’s future direction as an artist and most particularly as a filmmaker.

She has been an award-winning Director and Producer since 1984 when she started out as co-founder of the Channel 4 Workshop `Derry Film & Video’. Her work has spanned many genres from documentary to feature film. She co-wrote and directed her first drama, ‘Hush-a-Bye Baby’ (1990), which won The Ecumenical Jury Award at the Locarno Film Festival 1990, the first of several international awards. She formed Besom Productions Ltd. in 1992 and produced a series of award winning titles chronicling aspects of the ‘Troubles’. They included ‘12 Days in July’ (C4 1997) a critically acclaimed account of the Drumcree / Garvaghy Road dispute and ‘The Hunger Strike’,  (BBCNI 2006) which broadcast to record viewing figures in the 25th anniversary year of the 1981 Irish Hunger Strike. Her deeply personal documentary ‘Bloody Sunday-A Derry Diary’ (RTE & ZDF/Arte 2010) was made over a twelve-year stretch from 1998 to 2010 and followed the Tribunal of Inquiry into Bloody Sunday from the perspective of local people in addition to addressing Margo’s own experiences as a witness to Bloody Sunday. It was nominated for the Prix Europa.  In 2008, she produced the multi award winning feature documentary ‘Waveriders’ about surfing in Ireland directed by Joel Conroy. Her documentary ‘Eamonn McCann, A Long March’ (2018) was about the election of the iconic civil rights activist to Stormont and a look back at what motivated him to engage with politics 50 years ago. Margo’s work has been taught in media courses in Ireland and abroad and has been widely anthologised. She received the inaugural award for ‘Outstanding Contribution to Documentary Filmmaking’ from the Docs Ireland Festival in Belfast on 15 June 2019. Her films, ‘Hush-A-Bye Baby’ and ‘Waveriders’ were named among the 50 Best Irish films ever made by Irish Times critics Tara Brady and Donald Clarke on 2 May 2020.