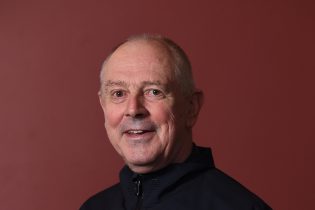 Born in Dublin in 1946, Richard Gorman was educated at Trinity College Dublin and Dun Laoghaire School of Art.

Frequent visits to Japan have influenced his working methods and materials, instanced in a series of large-scale works on handmade washi paper, which he produced in western Japan in 1999. His oil paintings on linen typically involve clearly defined interrelated blocks of colour, creating tensions between themselves and the edge of the picture. ‘He has a distinctive colour sense, one inclined towards a muted, classical palette shot through with flashes of brightness that belong to a different tonal scale entirely…..expanses of zinging hues: lemons and acid yellows, lime greens and salmon pinks. They dance against the sombre greys and browns’ (Aidan Dunne Irish Times June 2007)

He has participated in group shows such as Sight Specific, Kilkenny Arts Festival (2002) and at the Berkeley Art Museum, California and the Drawing Center, New York (2000) and The Pursuit of Painting at IMMA (1997).

He has received awards from the Arts Council and the Department of Foreign Affairs, as well as the Palette D’Or at the 1986 Festival International de Peinture, Cagnes-sur-Mer, France, and the Pollock-Krasner Award in 1996. In 2005 he was elected RHA at the Royal Hibernian Academy.

He divides his time between Dublin and Milan.