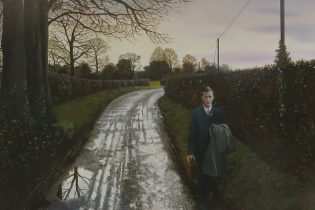 Born in Worcester in 1949, Martin Gale moved to Ireland at a very early age. He was educated in Ireland and graduated from the National College of Art and Design in 1973.

In 1975 he held his first solo exhibition in the Neptune Gallery in Dublin, and in 1980 he moved to the Taylor Galleries where he has had regular solo shows ever since. He represented Ireland in the XI Biennale de Paris in 1980, and has since represented Ireland abroad a number of times.

His work generally responds to the contemporary Irish landscape, and how people interact with it. His paintings often create a dark commentary on rural life in modern Ireland. He paints in a realist manner, employing both oils and watercolour. His realism is a hybrid, with its formal antecedents lying with 1970s photorealism, and straight forward realism of the kind practiced in the earlier decades of the twentieth century. It is essentially an urban style, leavened by its subject matter, the environment of rural Ireland. His arrested narratives have the same edge as some of our tougher novelists. The resulting anxiety often captures the unease about identity and place that fundamentally determines much of the contemporary Irish debate. His landscapes are defined by the activity of its occupants.

In the early 1980s he was the subject of an Arts Council touring exhibition, travelling throughout Ireland. In 2004 he was again the subject of a major retrospective, held first in the RHA Gallagher Gallery, and subsequently in the Ulster Museum in Belfast in 2005, under the auspices of the Nissan Art Project, which took a concentrated review of his work over the previous decade, with a coda added of paintings from the late seventies through the eighties.

He has exhibited widely in Ireland, England, Europe and the USA. His work can be found in many public, corporate and private collections. He exhibits regularly with the Taylor Galleries in Dublin. He has been a full member of the Royal Hibernian Academy since 1996, where he was formerly the Keeper, and has been a member of Aosdana since its inception.

Martin Gale is represented by the Taylor Galleries in Dublin.

In 2013 he was awarded an Honorary Doctorate in Fine Art from NUI Maynooth.