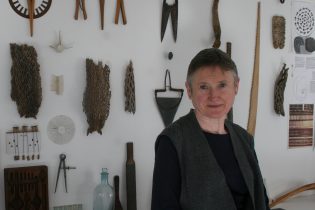 Born in Cork in 1959, Marie Foley studied Sculpture at the Crawford College of Art in Cork, Goldsmiths College in London and Cardiff College of Art. She was awarded an MA and a National Diploma in Art with Distinction.

Her sculptures comprises elements which are carved in wood, modeled in porcelain and with additional hand-worked or salvaged elements in metal, stone and glass. Her language is one of symbolic form, form which becomes a vehicle for the spiritual in nature.

Her work has been exhibited in solo and group exhibitions in Ireland, England, Wales, France, Spain, Germany, Italy, Holland, Hungary, Poland, Finland, Canada, USA and Japan. She was the first Irish artist to have a solo Exhibition in the Irish Museum of Modern Art.

She has received various Arts Council awards. Other awards include an International Ceramic Award, a Canada Council award and The New Horizons Award from the Calouste Gulbenkian Foundation.