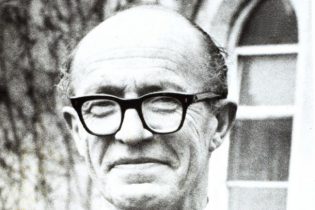 Born in Munich, Germany, Aloys Fleischman was educated at University College, Cork (D.Mus., 1963), the State Academy of Music, Munich, and at Munich University. He was appointed in 1934 to the chair of music at UCC, a post he held until his retirement in 1980.

He was founder and conductor of Cork Symphony Orchestra; former chairman of Cork Orchestral Society, Cork Ballet Company, Music Teachers’ Association and Cork Sculpture Park Committee. He was former vice-chairman of the Irish National Ballet, former Director of Cork International Choral and Folk Dance Festival; former member of the Advisory Committee on Cultural Relations at the Department of Foreign Affairs, and Irish National Commission for UNESCO. He founded Cumann Náisiúnta na gCór, of which he was appointed Honorary Life President in 1983.

His works include a symphony, two overtures, five song-cycles, four ballets, (one full-length based on The Táin), eight works for choir and orchestra, and a number of chamber music and solo instrumental works. He authored Music in Ireland, contributed to Grove’s Dictionary of Music, to A New History of Ireland (Vol VI), and to two encyclopaedia. He completed a major compilation of Sources of Traditional Irish Music just before his death in July 1992.