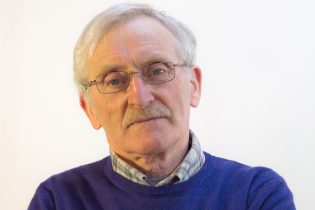 Born in Limerick in 1939, Tom Fitzgerald studied at the Limerick School of Art & Design where he later served as head of the sculpture department. He was a founder member of Limerick’s annual EVA exhibition in 1977.

Solo shows include A History of Silence at the Ashford Gallery, Royal Hibernian Academy (2006); The Ministry of Dust at Limerick City Gallery of Art (2004); a retrospective at Monaghan Museum (1999); solo shows at the Butler Gallery, Kilkenny and the Rubicon Gallery, Dublin (1998); Project Arts Centre, Dublin (1995); and Hendriks Gallery, Dublin (1985). He has participated in group shows in France, Germany, Italy, Austria, Hungary, New York and South Korea.

In 2004 Gandon Editions published one of their profile series on the artist and also a book of drawings The Ministry of Dust, to accompany the exhibition of that name. In 2005 he was included in a representative show, Contemporary Art from Ireland at the headquarters of the European Central Bank, Frankfurt.