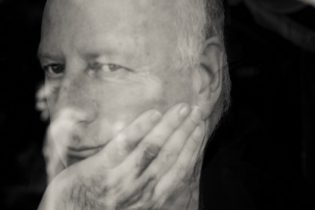 Roger Doyle was born in Dublin and studied composition on scholarships at the Royal Irish Academy of Music, the Institute of Sonology at the University of Utrecht and the Finnish Radio Experimental Music Studio.

He has worked extensively in theatre, film and dance, in particular with the music-theatre company Operating Theatre, which he co-founded with performer Olwen Fouéré, and whose aim was to integrate music as an equal partner in the theatrical experience. Operating Theatre performed in conventional and site-specific venues in Ireland, England, Holland, France, Venezuela and the USA and released several records.

Babel, his magnum opus, was begun in 1990 and had its first public showing in an entire wing of the Irish Museum of Modern Art in 1992 as a dance piece. Subsequent sections were composed during residencies at the University of Washington in Seattle, the Banff Centre for the Arts in Canada, the EMS studios in Stockholm and at the Royal Conservatory of Music in The Hague. A five-CD box set Babel was released to celebrate the work’s completion and the composer’s fiftieth birthday in 1999. Each piece of music is a ‘room’ or space within an imaginary Tower Of Babel, a celebration of the multiplicity of musical language.

Other works include a piano score for the Gate Theatre production of Salomé, directed by Steven Berkoff, which played in Dublin, London’s West End and on three world tours. The music, performed by the composer, was released on CD in 2000, as was the CD Under the Green Time, a collaboration with the Netherlands Wind Ensemble. A large-scale electronic work Passades was released on three CDs between 2004-2007 on Dutch and German labels.

He was commissioned by RTÉ for a work for symphony orchestra and pre-recorded acted scenes, a soundtrack from an imaginary film, called Adolf Gébler, Clarinettist – which premiered in 2008 in the NCH, performed by the National Symphony Orchestra. A second ‘cinema for the ear’ The Room in the Tower was premiered by the Crash Ensemble in 2009.

Recent album releases are: The Thousand Year Old Boy (explorations in imagined world musics – 2013); Time Machine (music composed around telephone messages from the 1980s – 2015);  Frail Things In Eternal Places (electronic sounds with the scored and/or improvised vocal collaborations of 8 singers – 2016); and the electronic opera Heresy, which premiered at the Project Arts Centre in 2016, and was released on a double album in 2018. Heresy is based on the life and work of Italian philosopher/monk Giordano Bruno who was burnt at the stake in 1600 as a heretic. It was broadcast on RTÉ lyric fm in August 2017.

A feature documentary by filmmaker Brian Lally ‘The Curious Works Of Roger Doyle’ has recently been screened at various film festivals and shown on Irish RTÉ 1 TV in August 2021.

His second opera iGIRL was completed in 2020 and a full studio recording made and released on a double album in 2021, with the libretto by celebrated Irish playright Marina Carr. RTÉ lyric fm broadcast this opera in September 2020.

He has won the Programme Music Prize (1997) and the Magisterium Award (2007) at the Bourges International Electro-Acoustic Music Competition, France, and the Marten Toonder Award (2000) in recognition of his innovative work as a composer; and is a member of Aosdana, Ireland’s state-supported academy of creative artists. In 2019 he was elected by his peers in Aosdana to the higher honour of Saoi, conferred on him by the President of Ireland.

His most recent album is called Finnegans Wake – Suite Of Affections, where 19 spoken excerpts from Joyce’s work have been set to music.