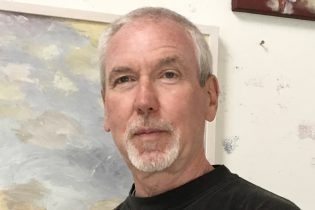 Micky Donnelly was born in Belfast in 1952. He studied at the University of Ulster from 1976 to 1981 and received his BA and MA in Fine Art. He exhibited his paintings, drawings and installations in numerous solo and group exhibitions in Ireland, Britain, Europe, New Zealand, Japan, Mexico, Canada and America, and was included in a number of high-profile international survey exhibitions of Irish Art.

He received many awards and prizes, and spent time working in Italy, the USA, and New Zealand. He was a founder member of Circa art magazine and wrote about contemporary art for various publications.