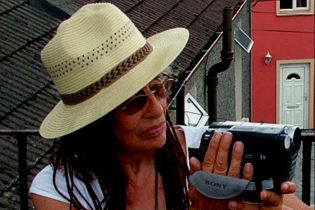 Born in London in 1934 to Irish parents, Margaretta D’Arcy was raised and educated in Ireland.

Her novels include Tell Them Everything (1962) and Awkward Corners. Her plays, most of which have been broadcast by RTÉ and the BBC, include The Pinprick of History, Vandaleur’s Folly, Women’s Voices from West of Ireland, Prison-voice of Countess Markievicz, A Suburban Suicide, and many more that were devised as group productions.

In 1996, she complied Galway’s Pirate Women: A Global Trawl for Women’s Pirate Press. She has collaborated at length with John Arden, jointly producing more than 10 plays and a series of political and cultural essays.

She organises a biannual arts festival in Galway, of audio-visual work by women.