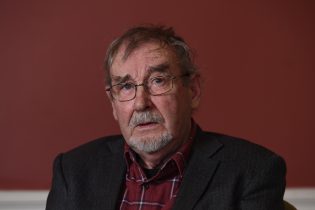 In 2002, he collaborated on a book with the poet Vincent Woods, and he is currently working on a series of etchings based on the “Nighttown” episode of Joyce’s Ulysses.

His commissions include many portraits and murals, and the Stations of the Cross in Iniskeen, Co. Monaghan. His work is held by the Hugh Lane, Allied Irish Banks, the Arts Council and Trinity College, Dublin.