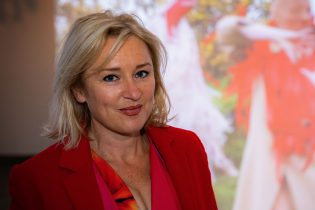 Amanda is an internationally recognised and critically acclaimed artist working across the mediums of live art, performance, sculpture and installation. The Irish Times have said, ‘Coogan, whose work usually entails ritual, endurance and cultural iconography, is the leading practitioner of performance in the country’. Her extraordinary work is challenging, provocative and always visually stimulating. Using gesture and context she makes allegorical and poetic works that are multi-faceted, and challenge expected contexts. She is one of the most dynamic contemporary artists practising in live art.

The body, as a site of resistance, is the centrality of Coogan’s work. She encompasses a multitude of media; objects, text, moving and still image, all circulating around her live performances. Her expertise lies in her ability to condense an idea to its very essence and communicate it through her body. Time is a key material in Coogan’s practice, building controlled instability into the fabric of her work. The long durational aspect of her live presentations invites elements of chaos with the unknown and unpredicted erupting dynamically through her live artworks.

Coogan was awarded the Allied Irish Bank’s Art Prize and has extensively presented and performed her work, including at The Liverpool Biennial, PS1; New York, The Whitworth Gallery; Manchester, The Museum of Fine Arts; Boston, Van Gogh Museum; Amsterdam and the Manchester International Festival; The MAC, Belfast; The Niemeyer, Aviles. She delivered two large-scale live art exhibitions in the National Gallery of Ireland and the Museum of Contemporary Art, Jacksonville in late 2018. Her 2015 live exhibition; I’ll sing you a song from around the town, was described by Artforum as ‘performance art at its best’.