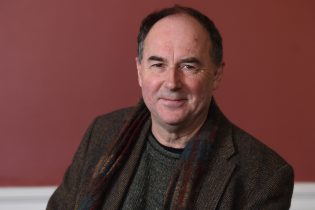 Harry Clifton was born in Dublin in 1952, but has travelled widely in Africa and Asia, as well as more recently in Europe.

He won the Patrick Kavanagh award in 1981 and has been the recipient of fellowships in Germany, France, the United States and Australia.

He has published five collections of poems,  including The Desert Route:Selected Poems 1973-88 and Night Train through the Brenner, all from Gallery Press. On the Spine of Italy, his prose study of an Abruzzese mountain community, was published by Macmillan in 1999. A collection of his short fiction, Berkeley’s Telephone, appeared from Lilliput Press in 2000.

His most recent collection of poems Secular Eden:Paris Notebooks 1994-2004 was published by Wake Forest in 2007 and won the Irish Times Poetry Now award.  He has taught in Bremen and Bordeaux universities, as well as Trinity College and University College Dublin.

He returned to Ireland in 2004 and was Ireland Professor of Poetry from 2010 – 2012. A new collection The Winter Sleep of Captain Lemass was published by Wake Forest and Bloodaxe Books early in 2013.