Aosdána expresses great sadness on the death of John Kinsella 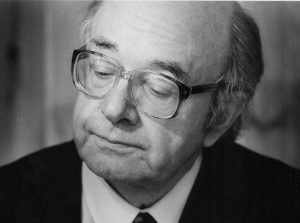 Born in 1932, John Kinsella was one of Ireland’s foremost composers .He spent much of his early life as a composer while also working in RTÉ, initially in radio production and later as Director of Music. He retired as Director of Music in RTÉ in 1998 to concentrate of full-time composition.

He produced a substantial compositional output, initially in serialist-modernist styles, before a major re-evaluation and shift of approach in 1979 after which he developed a more personal tonally-centred style.  A masterful orchestrator, amongst the large output of predominantly instrumental music are a remarkable eleven symphonies, several concertos for different instruments and a great diversity of chamber music, including a series of very fine string quartets.

His work has been widely performed and recorded, and he received the Marten Toonder Award in 1979 and was a founder member of Aosdána in 1981. In 2019 he received a Lifetime Achievement Award from the National Concert Hall.

“John Kinsella leaves behind a great legacy, both the large body of musical work which will live on and delight audiences in concert halls and recordings for many generations to come, and his place in the affections by so many people who were fortunate to know him as a gentle and warm artist and human being. He will be sorely missed, but leaves us greatly the richer for his time amongst us.”