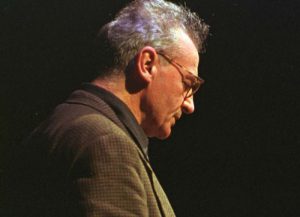 Aosdána and the Arts Council express great sadness at the passing of writer Seamus Deane. Arts Council Chair Prof. Kevin Rafter said: “A gifted writer and a profound intellect, Seamus Deane was a master of every writing form. As a critic, an editor, a poet and a novelist, Deane brought concentrated rigour and empathy to his work. An inspiring teacher and continual advocate for Irish writing, Seamus Deane leaves behind a powerful literary and cultural legacy.”

Born in Derry in 1940, Seamus Deane was educated at Queen’s University and Cambridge University. He was professor of Modern English and American Literature in University College Dublin, and had lectured extensively across Europe and the United States.

His collections of poetry included Gradual Wars (1972), which won the AE Memorial Prize, Rumours (1977), History Lessons (1983) and Selected Poems (1988). He had written numerous works of criticism on Irish literature, and a history of the French Enlightenment.

His first novel, Reading in the Dark, was shortlisted for the Booker Prize in 1996 and won the Irish Times Literary Award in 1997.
He was a director of the Field Day theatre company, and was general editor of the Field Day Anthology of Irish Writing.

He is survived by his partner, Emer Nolan, their daughter Iseult, his first wife Marion and their children Conor, Ciarán, Cormac and Éimear.